In June 2012 EVOKE Productions, a Guernsey amateur dramatics company, performed an hilarious comedy written by Michael Pertwee and John Chapman and I was asked by the director Chris Bougourd to design the posters and programmes for the show.

This is a tale of comic predicament and mistaken identity which unfolds with real wit and style.
A Portuguese time-share villa has been double-booked, unknown to the company Rep, the myopic tippler Commander ‘Chitto’ Chittenden.

When Mary and Henry arrive shortly after Eve and Leslie, Chitto manages to remain unaware that there is more than one couple on the scene.

The confusion is compounded when each couple mistakes the other for the servants.

Henry seems to have the upper hand as he discovers that Eve is married, but not to Leslie, when his mother-in-law arrives and he had to bribe the other couple to impersonate his alibi, Sir Piers and Lady Marchbanks.

Henry’s girlfriend, Mary, has to play the servant, much to her annoyance but it looks as though things might work out until the real Sir Piers arrives, followed by Henry’s wife.

However, the final, hilarious disguises donned by Mary, Perky, Eve and Leslie might just save the day! 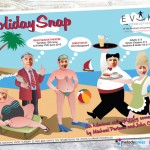 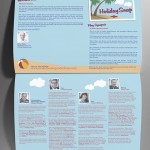